A DNA Test to determine your ancestry

What is the Ancestral Origins DNA test?

The ancestral origins DNA test can reconstruct a part of the genetic history of the tested person. It will inform the participant about the geographic location of his or her ancestors. The report is very accurate and contains all of the major ethnic groups including First Nations or Native Americans. Your genetic population matches will be displayed on a world map. The darker regions corresponds to stronger matches. See this image for an example. 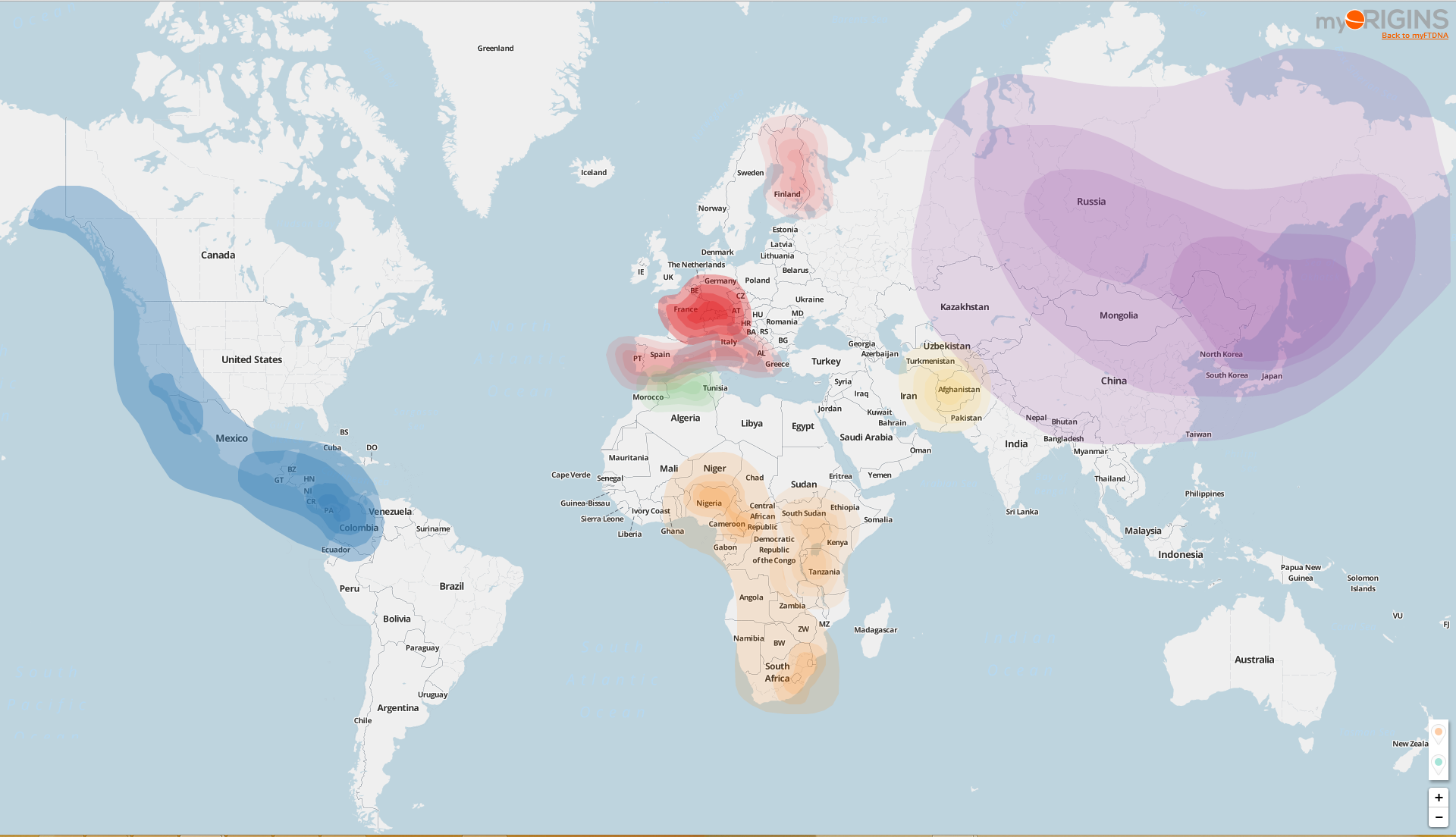 The ancestral origins test covers all primary population clusters as well as the most common genetic populations. The amount of DNA you share with each group is reported as a percentage. The populations covered by the test are the following:

Be aware that this DNA test is not able to exclude or confirm native American ancestry with perfect accuracy. Although DNAForce Inc. strives to provide the most accurate interpretation of the results possible, many DNA mutations are still uncatalogued. Some expected ancestry matches may not show up for a number of reasons. For example; due to your ancestor being either too many generations back in time, due to random recombination and that particular ancestry not getting passed down to you, or due to you being from a population that is underrepresented in the reference population. Finally, please note that this test does not replace a relationship test; if you would like to establish if two people are related by DNA, please contact us to discuss the appropriate test.

Due to the statement of limitations, we offer a full 30-days money back guarantee. If you are not satisfied with your native american DNA test results within 30 days of the results been released, to start the refund process, please send us an email at info@paternitytest.ca with the subject line "refund"; in the body of the email, include your full name, telephone number and address provided on your order.

199 CAD + tax for one people for buccal swabs. If professional collection is desired, the appointment fees are of 85 CAD.

This test must be done with mouth swabs.

How to do the test?

Choose one of the three following options:

Come to your appointment at your preferred service location.See list of locations here.
3

The nurse will collect the saliva by swabbing the inside of the mouth.
4

The DNA of the samples will be analysed.
5

Obtain your results ! (by mail, email or both).

To start, call us at:

or prepay online, and we will call you:

Collect your saliva, using the coton-tip applicators included in the kit.
3

Return your samples by mail to the lab.
4

The analyse will be done at the lab.
5

Obtain your results ! (by mail, email or both).

Collect right away, then mail-in your samples

Mail your samples to the address indicated in the guide.
4

The analysis will be done at the laboratory, after receipt of your samples.
5

Obtain your results ! (by mail, email or both)

Print the guide, then collect your saliva right away