X-Rays produced from the Linac Coherent Light Source were used to study the ultrafast response of DNA when exposed to UV light. Under normal assumption, we would expect high energy photons to ionize DNA which causes it to react chemically resulting in malfunctioning DNA products. The researchers found mechanisms within thymine that are able to absorb UV-light and even X-Ray light, then dissipate the energy as heat and preventing undesired cheminal reactions.

For DNA to resist UV radiation, it must instead dissipate as heat the energy it receives from UV light, rather than by reacting chemically. The researcher have found, by using an ultrafast x-ray pulse, that an innermost electron of the thymine molecule is stripped away under X-ray light. This results in an unstable electronic cloud around the atom. The researcher observed Auger radiation effects which implies that an outer electron tickles down to the core to fill in the gap, resulting in heat and preventing chemical reactions from ionization.

The tools developed for this technique could help many other fields in biology or molecular chemistry. 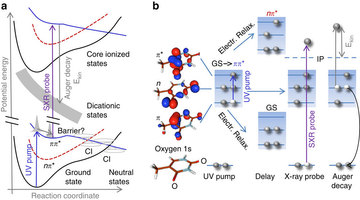 a). Illustration of the photoexcited molecular state. b) mechanism of heat dissipation in DNA resulting from the absorption of UV light.