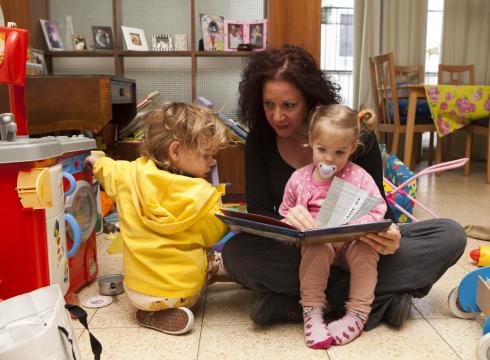 Ellie Lavi with her daughters Maya and Shira.

Ellie Lavi, an American-Israeli shown on the left returned to the US with her new born child. Trouble begun when she applied for citizenship for her daughter. An embassy clerk asked her if she got pregnant from a fertility clinic. She said yes and was immediately told that the child was not eligible for citizenship, unless she could prove that the sperm was donated by an American male. “I was humiliated and horrified. We’re talking about the children I gave birth to. Of course they’re my children”. The situation is not limited to the US; Canada and Germany have similar laws.

Another example is that of Malkiat Kandola who used in-vitro fertilization treatment to conceive of her child. Since the sperm and the egg were donated by third parties, DNA testing came back as negative. She was in India when she gave birth to her child. When returning to Canada, the child was denied citizenship on the grounds that he had no genetic ties to his parents. Nine years later today, the child is still denied long term stay by order of the Canadian appeal courts.

Since DNA testing is negative, courts have consistently ruled against the family even if the mother can prove she gave birth to the child.

The story serves as a warning to anyone considering IVF treatment: the state will not provide citizenship to your child in the event that you give birth in another country through in-vitro fertilization even though you yourself are a citizen. That has happened to a number of women who have travelled to other countries to get in-vitro fertilization and the saddening part is that the children are not recognized even though the woman carried them in her womb! For starters, the law states that not unless the sperm is traced back to the biological father, who should be a Citizen, there is no way the kid will acquire citizenship. This is conflicting and this is in regards to U.S citizenship regulations because a child adopted overseas by a U.S citizen can easily become an American citizen and a child born in America by parents who are not American citizens is instantly an American. But a baby born outside USA, through in-vitro fertilization and of an American mother is not eligible for US citizenship unless the donor is an American. It is clear knowledge that most clinics do not divulge the identity of the donor and this is due to confidentiality agreements, which makes it hard for mothers to prove specifically where the sperm came from.

Lawyers have been quoted as saying that tweaking has to be done on some of these laws and this is because the law has actually not kept up with major advances that have occurred where reproductive technology is concerned. The government defends itself by saying that the regulations are set for the purposes of preventing abuse where citizenship laws are concerned and this is in regards to when fraudulent claims of parentage are made.

Most mothers who are aware of this law usually travel back to their country and give birth there or they choose to lie about how they conceived because they know a lot of issues will arise out of it. Those who lie basically choose to not talk about it should a situation arise since this might also ignite some activity from consular officials. Citizenship of the child could be revoke if it came to light that the mother used IVF with sperm from an unknown father whose citizenship cannot be ascertained.

Please share this information to anyone you might know who is considering IVF treatment, especially if they consider to conceive via in-vitro fertilization in another country. This has been going on for the longest time and the government is not changing the laws anytime soon. A lot of parents have given up acquiring citizenship for their children because of these laws.