$28 billion is spend each year on biomedical research that cannot be reproduced with success. This is the conclusion published on June 9 in PLoS biology that attempts to quantify the degree of research waste.

The lead author Len Freedman is the head of the non-profit Global Biological Standards Institute , says "Clearly, there are tremendous inefficiencies [..], and this is putting a spotlight on that". The institute is dedicated to enhancing the quality of biomedical research by increasing the standards.

It has long been said that it takes 10 bad ideas before a good one is found and that it is especially true of science. However, the standards of waste used by the study is much lower than simple usability. The study did not looked at medical research that was bad because the subject was of little interested or that it didn’t lead to any useful results, either.

The study only looked at research which is so fundamentally flawed as to be objectively irreproducible. For example, it was recently discovered that a widely used and researched breast cancer cell was actually a melanoma cell, rendering all research based on it useless. Misidentified cell lines problems and mislabelled samples problems are rampant in the field.

The author estimated that $1 billion could be saved if scientists simply ran a DNA fingerprint test on their cell lines, before starting with testing. The result of the study is especially concerning considering that the entire budget of the National Institute of Health is $29.9 billion dollars. All biological research in the US is estimated to be at $119.3 billions dollars.

Stefano Bertuzzi, executive director of the American Society for Cell Biology wrote a rebuttal on his website. He states that research papers may contain technical errors that make it hard or impossible to replicate but that does not imply that the whole research is wasted. A competent research group will be able to find how to make it work even with some technical errors in the protocol. 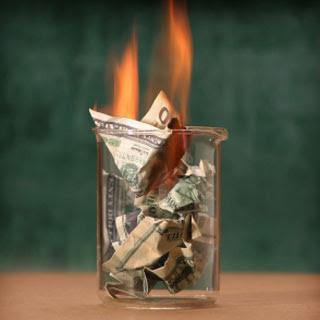 Today, we look at how fast $100 bills burn in Earth's atmosphere.